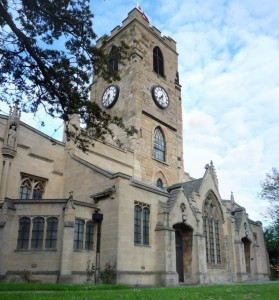 A COUNTY DURHAM construction firm has begun a major programme of refurbishment works on an historic North East church.

NCS, based in Chester le Street will be spending the next few weeks refurbishing Sunderland Minster’s roof and improving the facilities for visitors.

The work, which has been part funded by a £150,000 grant from the Heritage Lottery Fund (HLF), includes new lead covered roofing, repairs to the slate roofing, redecoration of the minster’s café kitchen, provision of a new kitchen ventilation system and toilet refurbishment.

NCS is building a strong reputation in the heritage construction sector after carrying out a major programme of refurbishment of Newcastle’s medieval Black Gate, which was shortlisted in the Building Conservation category in this year’s RICS North East Renaissance Awards.

NCS director, Sean Anderson, said: “We’re delighted to be involved in the refurbishment of such an important historic building which follows on from our work at the medieval Black Gate.

“Historic buildings provide many challenges but projects like this are hugely rewarding. We’ll be working hard over the next few weeks to ensure there is as little interruption to ‘normal service’ as possible.”

Beaumont Brown Architects (BBA) drew up the plans for the project, which is due for completion by the end of November.

‘‘These works are part of a long-term programme of repairs and improvements to the Grade II* church. It’s not only a very important building architecturally, but it also makes a significant social contribution to the city. Its repair seeks to preserve its heritage and improve the services the minster offers.’’

The Minster Church of St Michael and All Angels and St Benedict Biscop (commonly known as Sunderland Minster) was known as St Michael’s Church, serving the parish of Bishopwearmouth but was renamed in 1998 in recognition of Sunderland’s city status.

A church dedicated to St Michael has stood on the site for more than a thousand years; the parish of Bishopwearmouth, south of the River Wear, was founded in about 940AD, with an original stone church being built shortly afterwards.

Sheila Bamber, Canon Provost at Sunderland Minster, said: “The Minster is a notable building in this part of the city and we are delighted to be able to carry out this much needed work with support from HLF and other partners as part of the regeneration of the area.  As part of the project we will be installing a bike rack making it easier for cyclists to stop and enjoy our wonderful building.”

Ivor Crowther, head of HLF North East, said: “Thanks to money raised by National Lottery players it’s an exciting time for Sunderland’s heritage. As well as the refurbishment of the minster, the Old Fire Station is in the process of being developed as a cultural hub and the city will gain a heritage and wellbeing centre in the form of the Canny Space project. Sunderland is a priority area for our funding so we are delighted to play a funding role.”

NCS, which was established in 2002, undertakes projects across the country in areas such as education, sport and leisure, community and amenity, heritage and care, civil engineering work, manufacturing facilities and process infrastructure.

If you'd like to know more about NCS or you have a project to discuss, we'd love to hear from you - please give us a call or drop us a line.